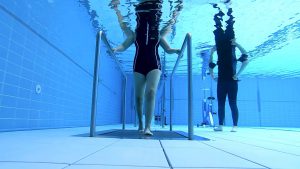 Objective: To investigate the effects of 4-months intensive aquatic resistance training on body composition
and walking speed in post-menopausal women with mild knee osteoarthritis (OA), immediately
after intervention and after 12-months follow-up. Additionally, influence of leisure time physical activity
(LTPA) will be investigated.

– Downloading the file will take up to 5 seconds and the file will open up automatically –
– After downloading two files, you have to create an account to gain access to all files and articles –