In this article, we endeavour to present an overview of the current state of affairs regarding the application of Aquatic Therapy in the elderly. We will quote a number of recent articles reporting Aquatic Therapy to:

All research efforts we are quoting are real and can be verified in the original articles. For this, please follow the links at the bottom of this page.

Personal note from the author:

At EWAC Medical, we strive to improve the quality of life of the people that use our equipment. Ageing of the human body comes with complaints and aches. Unfortunately, in a staggering amount of cases, age is also a debilitating disease. Many causes of these problems can be named. Some point to higher livings standards and better healthcare causing people to become older so that mental diseases come into view that would otherwise not be seen. Others point to our Western lifestyle including the food we eat or changes in our natural environment. We just don’t know. We prefer to demonstrate how we can support. In some cases, only a little bit, and in others, we may make a huge difference using Aquatic Therapy.
~ Eric Legdeur 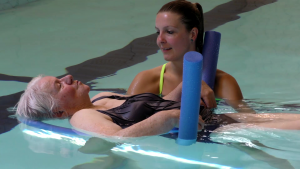 We may be inclined to think of our brain as a distinct organ from the body. In that circumstance, the important link between the body and the brain, the source of inputs and learning, is disregarded. There is undeniable interconnectedness between the brain and the body. The brain requires the body to maintain it, and the body requires the brain to direct it. This is how we perceive the world: the brain turns body sensations into a useful set of instructions that allows us to interact with our surroundings. Disconnected from the body (that is, dis-embodied), one may expect the brain to be unable to generate anything from the nonexistent external stimuli, causing it to “drift” away like an incorrectly calibrated compass.

Proponents of the embodied cognition thesis emphasize the active and significant role the body plays in the shaping of cognition and the understanding of an agent’s mind and cognitive capacities. In philosophy, embodied cognition holds that an agent’s cognition, rather than being the product of mere (innate) abstract representations of the world, is strongly influenced by aspects of an agent’s body beyond the brain itself. Thus, the embodiment thesis intends to reintroduce an agent’s bodily experiences into any account of cognition. It is a rather broad thesis and encompasses both weak and strong variants of embodiment. In their attempt to reconcile cognitive science with human experience, Varela et al.’s enactive approach to cognition defines “embodiment” as follows:~source: Wikipedia 2021 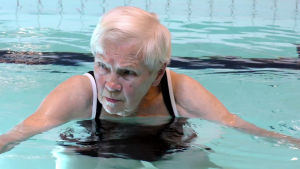 “By using the term embodied we mean to highlight two points: first that cognition depends upon the kinds of experience that come from having a body with various sensorimotor capacities, and second, that these individual sensorimotor capacities are themselves embedded in a more encompassing biological, psychological and cultural context.” ~Francisco J. Varela, Evan Thompson, Eleanor Rosch : The Embodied Mind: Cognitive Science and Human Experience pages 172–173

How water and embodiment are related

In a broader sense, the human race transitioned from an aquatic creature to a land creature, and hence the ‘memory’ of immersion in water is ‘ingrained’ in our genes. As a result for example, the body produces a neurological reaction while redistributing blood throughout the body. Aquatic treatment has been proven to improve numerous cognitive subdomains.

As a result, water immersion aids the embodiment process in a variety of ways. It briefly relieves us of the impacts of gravity, making us more comfortable in our bodies. This means that we can address human embodiment in the water at a young age and answer any demands that arise during our birth journey.

Dementia manifests as a set of related symptoms, which usually surface when the brain is damaged by injury or disease. The symptoms involve progressive impairments to memory, thinking, and behaviour, which negatively impacts a person’s ability to function and carry out everyday activities. Aside from memory impairment and disruption in thought patterns, the most common symptoms include emotional problems, difficulties with language, and decreased motivation. Dementia is not a disorder of consciousness, and consciousness is not usually affected. ~source: Wikipedia 2021

Alzheimer’s disease also referred to simply as Alzheimer’s, is a neurodegenerative disease that usually starts slowly and progressively worsens. It is the cause of 60–70% of cases of dementia. The most common early symptom is difficulty in remembering recent events. As the disease advances, symptoms can include problems with:

As a person’s condition declines, they often withdraw from family and society. Gradually, bodily functions are lost, ultimately leading to death. Although the speed of progression can vary, the typical life expectancy following diagnosis is three to nine years. ~source: Wikipedia 2021

The decay of the brain

Following the definitions above, it is possible to conclude that dementia is caused by brain injury. As a result, dementia can appear at any age because a brain injury might occur as a result of an accident in one’s life. The brain, on its own, decays slowly with age, resulting in an ever-increasing number of naturally occurring flaws, which eventually manifest in the person’s behavior.

The exact causes of Alzheimer’s disease are poorly understood. It seems to be a specific expression of damage to the brain that progresses more quickly than is the case in other ageing individuals.

Prevention and treatment of Alzheimer’s disease

The ways in which Alzheimer’s disease can be prevented are not yet entirely clear. 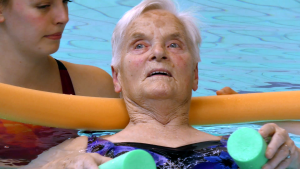 Quoting the Alzheimer’s Research & Prevention Foundation, ““Get moving: Regular exercise can reduce your risk by up to 50 percent. Studies show that women from ages 40 to 60 who exercised regularly demonstrated a profound reduction in cognitive decline and memory loss.”  Regular physical exercise can prevent Alzheimer’s disease by up to 50 percent, according to the Alzheimer’s Research & Prevention Foundation. This is because it helps to stimulate the brain’s capacity for maintaining memories while making new ones.

Aquatic Therapy is also known as:

In Alzheimer’s disease, Aquatic Therapy is helpful for:

Aquatic therapy offers the perfect safe and low impact environment for Alzheimer’s patients to get active and to reduce the progression of their symptoms:

In the following section we will describe two singular case reports as well as a case report describing ten adults, 88 years of age. 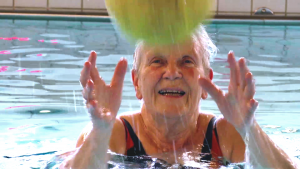 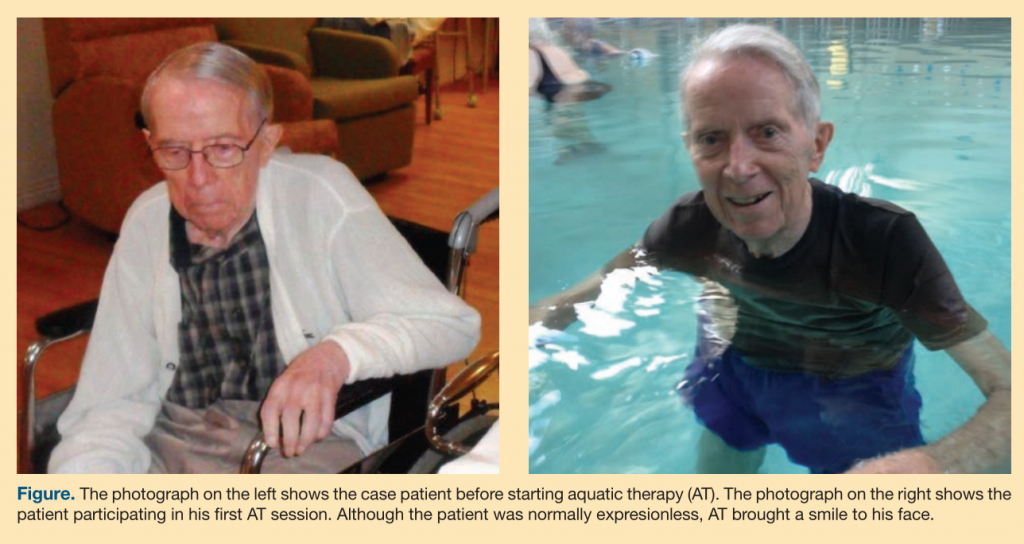 This investigation revolved around the feasibility of a dementia-specific aquatic exercise program for nursing home residents with a particular focus on the physical and functional benefits. 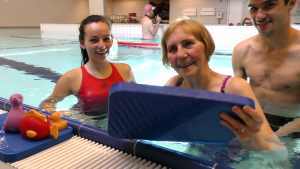 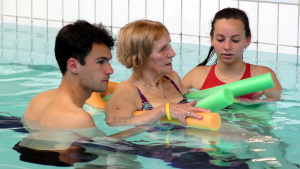 The notion of embodiment, in the way is described in this article is a relatively recent philosophical insight. This new insight is bound to have it’s impact on medical science, as well as theories of the mind and consciousness. Immersion in water can support the bodily awareness and promote the feeling of embodiment.

Dementia / Alzheimer’s are debilitating diseases for which, as of now, there is no cure. Certain medicins though can slow down the onset of these diseases. As this article shows, patients can benefit tremendously from aquatic physical exercise interventions. In the water the sense of embodiment is raised, as is mental clarity. This leads to radical (though temporary) improvements in the behavior and abilities of patients.

This website uses cookies to improve your experience while you navigate through the website. Out of these, the cookies that are categorized as necessary are stored on your browser as they are essential for the working of basic functionalities of the website. We also use third-party cookies that help us analyze and understand how you use this website. These cookies will be stored in your browser only with your consent. You also have the option to opt-out of these cookies. But opting out of some of these cookies may affect your browsing experience.
Necessary Always Enabled
Necessary cookies are absolutely essential for the website to function properly. This category only includes cookies that ensures basic functionalities and security features of the website. These cookies do not store any personal information.
Non-necessary
Any cookies that may not be particularly necessary for the website to function and is used specifically to collect user personal data via analytics, ads, other embedded contents are termed as non-necessary cookies. It is mandatory to procure user consent prior to running these cookies on your website.
SAVE & ACCEPT