In the framework of evidence based clinical practice (EBP), the best external evidence (scientific articles) should support the decision for aquatic therapy instead of therapy on land.

EBP covers two other domains that are equally important: 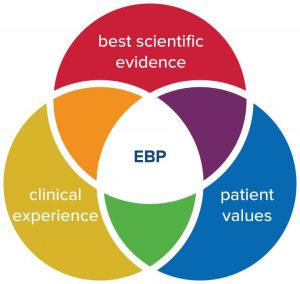 Clinical competence of the aquatic therapist is achieved by up-to-date – post-graduate – education. The Association International Aquatic Therapy Faculty (IATF) offers these programs, teaching various concepts which are connected with the competence profiles of aquatic physical therapists.

Aquatic therapy concepts can only be used appropriately when a pool is optimally suited to serve the therapeutic goals. This is what EWAC Medical offers in their wide range of products.

Therapeutic goals are derived from the International Classification of Functioning, Disability and Health (ICF) by the WHO, 2001.

WST covers virtually all neuro musculoskeletal ICF-goals including the most important topics in rehabilitation:

WST can be used to evoke subtle muscle contractions that are impossible to trigger outside the water. WST is applied over all age groups, from pediatrics to geriatrics and has been taught in over 50 countries.

WST is an aquatic therapy concept with elements of the Halliwick 10 point-program, generally used as pre-training for exercises that use the fluid mechanical properties of water:

As an example, in WST one might theorize clinically that the metacentric effects could promote central stability in an ataxic patient. 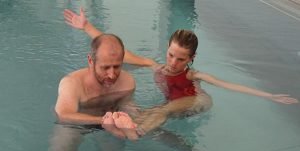 WST was developed by a team of physiotherapists in Switzerland in the early seventies, supporting James McMillan in his efforts to develop Halliwick towards “Halliwick-Therapy”. The development continues to this day, following contemporary issues in health care, such as:

Halliwick is originally concept for swim teaching developed by the late engineer in fluid mechanics James McMillan MBE. In 1949, he and his wife started to include disabled girls from the Halliwick-school in London in sessions of the swimming club where he acted as a volunteer swimming teacher. It was obvious that the biggest problems the girls encountered was a lack of postural control. The classroom teacher observed changes within a few weeks: better trunk-, head- and mouth control as well as increased self-esteem.

The swimming method seemed to have therapeutic potential especially because all rotation controls are related to trunk (core) activity, which are key for postural control on land. James McMillan knew how to use fluid mechanics in order to ease the problem and progressively train the girls. The approach soon became more structured and developed into the famous Ten-Point-Program.

Halliwick focuses on teaching rotational control: the practical approach to postural problems in 3 dimensions around 3 axes (sagittal, transversal and longitudinal) and a combination (diagonal). As an example, in Halliwick one might theorize clinically how to promote traversal rotational control in a child with hemiplegia. 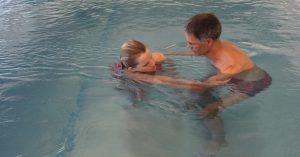 Currently, Halliwick is practiced all over the world. Especially children with neuromotor deficits can benefit enormously, given the many publications in the area. The Ten-Point-Program is a basis for other activities like swimming stroke, a-specific swimming competition, game circuits, or even scuba diving. Additionally, it allows for easy adaptation of movements to the (dis-)abilities of the subject.

Around 1955, physiotherapists in the German city Wildbad started resistance exercise in the pool with patients in a supine position. Supported by a neck collar and car tubes around the pelvis and the ankles (when necessary).

This method was quickly adopted in Bad Ragaz, where three-dimensional patterns of Proprioceptive Neuromuscular Facilitation (PNF) were included in the early sixties. This was the start of a long history of adaptations to the state of art in aquatic PNF.

The key element is the activation of muscles in (myofascial) chains as a preparation for functional activities in water and on land. Recently, principles of muscular fine tuning, PNF techniques (like the combination of antagonists) and training physiology have been included. Concepts like functional kinetics and core stabilization are also part of contemporary BRRM and applied to working with neurologic, orthopedic and rheumatic populations. See the Bad Ragaz website.

Examples of contemporary topics that are included in the course are:

As an example, in BBRM one might theorize clinically which bilateral reciprocal leg pattern and technique could be used for a patient who had a surgery for a herniated disc L4/L5 about 3 months ago and still experiences motor weakness at L5. What does the technique look like in order to specifically strengthen the segment-indicating muscle in the foot?”

Original Ai Chi has been developed by Jun Konno, the late owner of an aquatic fitness institute in Yokohama, Japan. Around 2000 Ai Chi quickly became popular because of it’s simplicity and effects.

The basis of support is gradually narrowing and challenge the control of the center of gravity progressively. Different protocols exist, consisting of a choice of the 20 kata’s and/or a different amount of repetitions, see Clinical Ai Chi website.

Clinical Ai Chi is adapted to the possibilities of a person with a musculoskeletal and/or neurological problem. The elements of Clinical Ai Chi should fit in a custom-made treatment program and be the result of a clinical reasoning process. Ai Chi is a postural activity in which transfers of the center of gravity, reaching with arms, supporting activity of legs and continuous concentric –eccentric contractions are characteristic. Most of these characteristics are related to static – and dynamic balance control and might influence motor control to prevent falling. 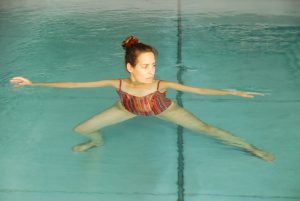 AMCT is a very recent development, based on the emerging notion that movement is important for brain functioning, brain vascular health and brain plasticity.

Both moderate aerobic exercise and High Intensity Interval Training (HIIT) increase blood flow in the body as well as the brain. At comparable physiological intensities, brain blood flow is higher in water than outside the water.

In one sentence: the added immuno-metabolic effects of (intensive) exercise in water opens a door to include cognitive elements – especially executive functions – during motor control in complex situations.

These situations often have an equilibrium component and might be difficult to achieve outside the water when working with patients with increased fall risk.

As an example, in AMCT one might clinically ask a patient: “are you able to walk in 4 different ways, always 3 steps, and try to mix these 4 ways in as many ways as you can”? 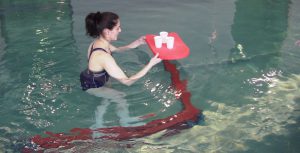 Memory and problem solving are the cognitive functions that are involved in this assignment of gait variability. It has become clear that important effects on neuroinflammation can be achieved, which might be of utmost importance in various life-style diseases.

It is easy to handle another person in – warm – water. This has led to a huge amount of passive handling concepts. The most known concept internationally is Watsu, or water Shiatsu, a wellness concept based on influencing meridians. Clients are handled with choreographic elements, which can lead to deep relaxation and happiness. Many variations exist: with or without music, under water or at the surface, without or with flotation aids.

Massage techniques are often included in a session, depending on massage skills of the “giver”.

Aquatic Passive Manual Handling can be used to make persons mind wander or day dream: activating one of the important large scale brain networks: the default mode network. Another option is to ask persons to concentrate on the movements and feel them: proprioceptive perception is used which is import in decreasing nociceptive stimuli. The clinical question then could be: “close your eyes and feel which movements your low back is making and try to interpret these as harmless”. 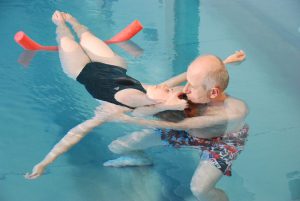 Manual skills can be used also without a choreography: the patients just float with flotation aids and the therapist applies manipulations from manual therapy techniques like e.g. Kaltenborn, Mulligan, osteopathy, chiropraxy. Scientific evidence of all passive manual handling is scarce.

Evidence is overwhelming: cardiovascular (endurance) training in water can have the same short-term and long-term physiological adaptations as cardiovascular training outside the water. The aquafitness industry created a massive amount of workout variations.

The principles are simple though: at least 20% of skeletal muscles come into play for some time and in some intensity in order to create an oxygen debt: this is the necessary stimulus for an increase in cardiac output.

Maintaining a certain level of functional endurance doesn’t need much work according to various norm values, e.g. those of the American College of Sports Medicine.

Increasing cardiovascular fitness with classical endurance training needs at least some 20 minutes at minimum 50% of the maximal oxygen uptake (VO2max). A time-efficient way is High Intensity Interval Training (HIIT). The original program exists of 8 bouts of 20 seconds 90% VO2max with 10 seconds of rest in between the bouts: this takes 4 minutes. 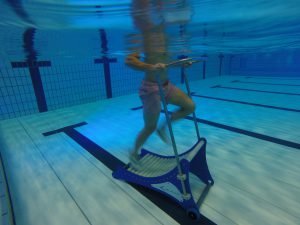 Aquatic Cardiovascular Training becomes increasingly more important in the treatment of a wide variety of diseases: not only for those that have a sedentary life-style (pain, muscle weakness, spasticity etc), but also for those that have a disease which is linked with neuro-inflammation, like Alzheimer or Multiple Sclerosis. A pool offers the possibility to train for those that are restricted on land.

As an example, in ACT a clinical question could be: “can you find a level of exertion in which you are a little out of breath during the next jumping exercises?”.

This website uses cookies to improve your experience while you navigate through the website. Out of these, the cookies that are categorized as necessary are stored on your browser as they are essential for the working of basic functionalities of the website. We also use third-party cookies that help us analyze and understand how you use this website. These cookies will be stored in your browser only with your consent. You also have the option to opt-out of these cookies. But opting out of some of these cookies may affect your browsing experience.
Necessary Always Enabled
Necessary cookies are absolutely essential for the website to function properly. This category only includes cookies that ensures basic functionalities and security features of the website. These cookies do not store any personal information.
Non-necessary
Any cookies that may not be particularly necessary for the website to function and is used specifically to collect user personal data via analytics, ads, other embedded contents are termed as non-necessary cookies. It is mandatory to procure user consent prior to running these cookies on your website.
SAVE & ACCEPT